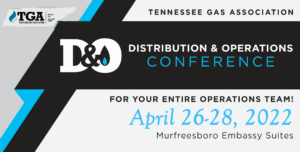 Registration is open for the Distribution & Operations Conference. The conference will be held April 26-28 at the Embassy Suites in Murfreesboro, Tennessee. Please visit the conference website for hotel, agenda, exhibit and registration information.

TGA will hold a Legislative Reception on Wednesday, February 23rd at the Hermitage Hotel in Nashville, TN. The reception will be held from 5:00 – 7:00 p.m. TGA members are asked to register by visiting the registration website and paying a member registration fee of $45 per person. Deadline to register is February 10th.

TGA Scholarship Application links are now available on the Scholarship page of the TGA Website.

There are two new announcements for this year’s scholarship applications.

Eligibility requirements are available by clicking on each application link.

TPUC will cover Inspection Preparation in the upcoming January and February classes. The class is one day and will be held at six different TGA member locations throughout the state. There is no registration fee but you will need to register to attend. There will be a maximum of 20 students per location.

Jerry served in many capacities with TGA, serving as President 2013-2014. He was instrumental in leading the charge for the Together Giving to Another, an outreach program established in 2012 that donates food and monetary donations to local charities. To date, TGA members have donated right under $20,000 to charities where TGA meetings are held.

If you would like to apply or learn more about this position, please follow the link below. Thank you for your interest and we wish you the best of luck with your job search!

We must pre-sell 1,000 plates in order for the specialty plate to go into production with the State of Tennessee.

Click here for more information and to submit your commitment for a specialty plate.