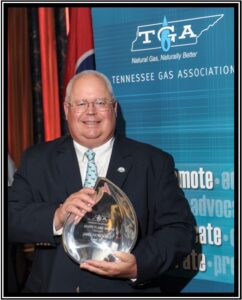 Over two decades of service and leadership as Gibson County Utility District General Manager, Pat Riley has established himself as an industry trend setter. Pat Riley has been in the Natural Gas Business for 40 years. He started his career at Allen & Hoshall Consulting Engineers in Memphis, TN in 1980 where he worked in the natural gas department doing various engineering duties. He came to Gibson County Utility District (GCUD) 33 years ago in 1987. He has served as District’s General Manager for the past 21 years.

While serving as General Manager, there have been many system accomplishments and recognitions.  In 2002, GCUD installed ground breaking technology with the Fisher Grid-Boss system on the high-pressure system and appeared on the front cover of the magazine, “Gas Industries”. In 2003, GCUD was featured on Pat Summerall’s “Champion of Industries” television program that reached approximately 70 million viewers. In 2004, GCUD received the Gibson County Chamber of Commerce “Industry of the Year Award”. The Automated Meter Reading system was introduced in 2007.

Pat created a new committee within Tennessee Gas Association (TGA), Compressed Natural Gas (CNG) Vehicle Committee. It’s focus was to promote and educate the public to the benefits of compressed natural gas vehicles.  By 2011, GCUD began converting its vehicle fleet to Compressed Natural Gas. By May 2015, the “Greenest and Cleanest” Natural Gas Refueling Station in the nation was built. GCUD was awarded five Environmental awards in its first year of operation.

From 2010 until 2014, Pat coordinated Natural Gas Vehicle Expos in Nashville. We brought in industry experts and invited all the legislators and local officials to promote the benefits of natural gas vehicles. In 2014, the Expo was held at the Titans Stadium and the next year, Pat organized a Tennessee Gas Association CNG Rally Across Tennessee visiting 5 cities. Pat received the Sales and Marketing Award in 2016 for implementing the CNG Across Tennessee Road Rally.

Over a span of 20 years, Pat has served as a Board member or held positions on various committees for the West Tennessee Gas Association (WTGA), Tennessee Gas Association (TGA), Tennessee Association of Utility Districts (TAUD), and Tennessee Renewable Energy Economic Development Council (TREEDC), and American Public Gas Association (APGA). Governor Haslam appointed Pat to a three-year term to serve on the Utility Management Review Board from 2013-2016 and again from 2016-2019. Some other recognitions include the TAUD “M.M. Bullard Award” in 2002 and in 2010 for the Financial and Operational Excellence. In 2013, Pat received the prestigious TGA “Silver Flame Award”.

Beyond GCUD and over a span of 22 years, he has held positions on the Trenton Kiwanis Club, Trenton Rotary Club, Gibson County Chamber of Commerce, WestStar, Carl Perkins Exchange Center Board, City of Trenton Alderman, TN Chamber of Commerce Board of Directors, and WLJTV Board in Martin. In 2004 and 2005, he completed all three levels of the Elected Officials Academy Training and the 10-week Citizen Police Academy Training. He received the “Person of the Year Award” from the Gibson County Chamber of Commerce in 2000 and the WestStar “Jimmy Daniel…Make A Difference Leadership Award” in 2013.

Pat is a member of the Northwest Tennessee Photography Club and his love of photography has afforded him recognition at various photography contest. He has been the photographer for the TGA and the APGA Annual Conventions for several years. He has been published in the “Tennessee Titans of Industry and Commerce” state recruitment book, Tennessee Watercolor Association Annual magazine and in a magazine called Tea Journey.

Pat and wife, Julie will continue to make Trenton their home. We are certain that Pat will continue his interests in Gibson County and the State of Tennessee as a whole. Pat’s retirement begins August 14, 2020.

Gibson County Utility District wishes him all the best in what lies ahead.

It has been a blessing and a privilege to have worked at GCUD for so many years. To lead in a servant’s role is the blessing and the privilege is to have worked along side so many dedicated employees. I feel that I have left GCUD as a better company that will continue to meet the challenges that are to come.

As this chapter of my life closes, another chapter opens. I look forward to the plans my Lord has in store for me. I will continue to be a servant in whatever I do. Retirement is not the end of the road. It is the beginning of an open highway. I wish all the best for GCUD!

Pat’s updated contact information can be found in the Member Directory. 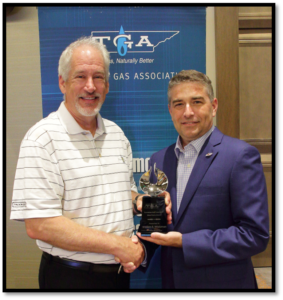 It is with excitement and hesitancy that I announce my retirement from East TN Natural Gas.  I realize that our contact with each other may wane but, I do not want to lose touch with everyone.

My next chapter has yet to be written, but it will most certainly include an increase in travel, more time spent on my core hobbies which include sailing, spelunking, hiking/backpacking, kayaking, scuba diving, and golf (well not sure I can call golf a hobby when I am so bad at it); or perhaps a return to work in some capacity in the natural gas industry.  I have recently obtained my US Coast Guard Captain’s License so am contemplating investment in a sailboat to place into charter and provide Captain services.  Alternatively, I may do a bit of captaining on a freelance basis.  I am also a US Sailing certified keelboat instructor so can provide sailing lessons as well.  I think I will find plenty to do with my time.

I am thankful for my involvement in TGA and the forever friendships that it produced.

Bill’s updated contact information can be found in the Member Directory.